Running OpenSIPS with the right memory configuration is a very important task when developing and maintaining your VoIP service, because it has a direct effect over the scale of your platform, the customers you support, as well as the services you offer. Setting the limit to a low value might make OpenSIPS run out of memory during high volume of traffic, or during complex scenarios, while setting a big value might lead to wasted resources.

Unfortunately picking this limit is not something that can be easily determined by a magic formula. The reason is that memory consumption is often influenced by a lot of external factors, like calling scenarios, traffic patterns, provisioned data, interactions with other external components (like AAA or DB servers), etc. Therefore, the only way to properly dimension the memory OpenSIPS is allowed to use is by monitoring memory usage, understanding the memory footprint and tuning this value accordingly. This article provides a few tips to achieve this goal.

To understand the way OpenSIPS uses the available memory, we have to point out that OpenSIPS is a multi-process application that uses two types of memory: private and shared. Each process has its own private memory space and uses it to store local data, that does not need to be shared with other processes (i.e. parsing data). Most of the time the amount of private memory used is small, and usually fits into the default value of 2MB per process. Nevertheless understanding the way private memory is used is also necessary in order to properly dimension your platform’s memory.On the other hand, shared memory is a big memory pool that is shared among all processes. This is the memory used by OpenSIPS modules to store data used at run-time, and in most of the cases, the default value of 16MB is not enough. As I stated earlier, it is impossible to pick a “magic” value for this limit, mostly because there are a lot of considerations that affect it. The data stored in the shared memory can be classified in two categories:

The amount of memory used by each of this data may vary according to the services you offer, your customer base and their traffic.

There are two ways to monitor OpenSIPS memory statistics: 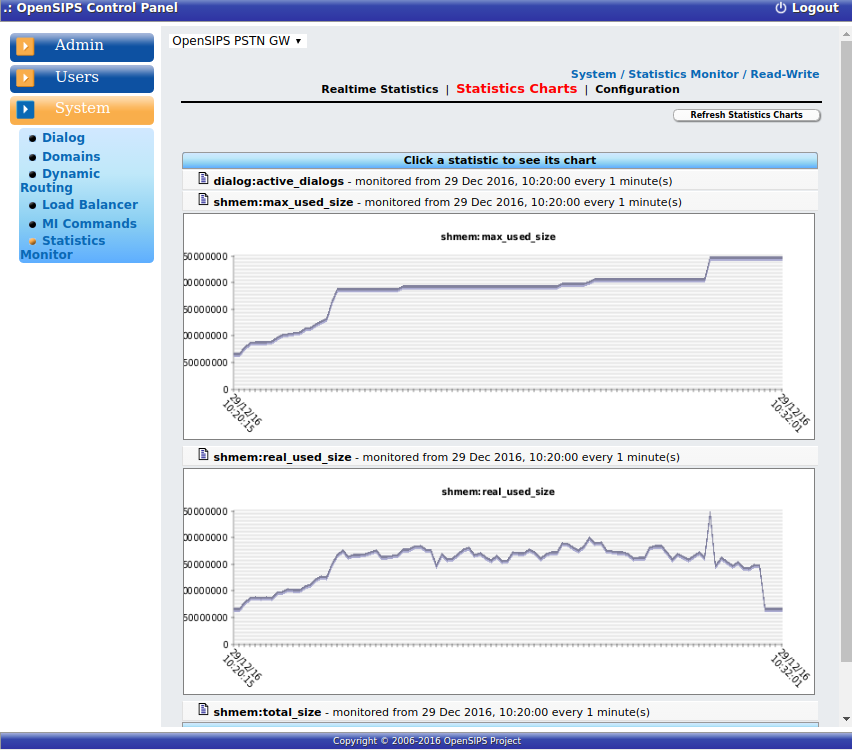 From both you can observe 6 values:

In order to have a better understanding about the memory used, we will take as an example a very specific platform: an outbound PSTN gateway, that is designed to support 500 CPS (calls per second) from customers and dispatch them to approximately 100K prefixes, cached by the drouting module. You can see the platform’s topology in this picture:

To figure out what happens in the scenario Image 1 presents, we will extract the real_used_size, max_used_size and actve_dialogs statistics: As you can observe, at the beginning of the chart, the memory usage was low, close to 0. That is most likely OpenSIPS startup. Then, it grows quickly until around 60MB. That is OpenSIPS loading the 100K of prefixes into the drouting module cache. Next, as we can see in the **active_dialogs **statistic, traffic comes in in batches. Therefore OpenSIPS memory usage increases gradually, until around 170MB and stabilizes with the call-flow. After a while, the dialog numbers start to decrease, and the memory is again gradually released, until it ends to the idle memory of 60MB used by the drouting cache.Taking a closer look at the charts, you will notice two awkward things in the second half of the period:

The reason for this spike is that during cache reload, OpenSIPS stores in memory two sets of data: the old one and the new one. The old set is used to route calls until the new set is fully loaded. After that, the memory for the old set is released, and the new set is used further on. Although this algorithm is used to increase the routing performance, it requires a large amount of memory during reload, usually doubling the memory used for provisioning.Following the article till now, you would say that looking at the memory statistics and correlating traffic with memory usage can be fairly easy to understand how OpenSIPS** **uses memory and what are the components that use more. Unfortunately that is not always true, because sometime you might not have the entire history of the events, or the events happen simultaneously, and you can not figure out why. Therefore you might end up in a situation where you are using large amount of memory, but can point out why. This makes scaling rather impossible (for both customers and provisioning rules), because you will not be able to estimate how components spread the memory among them. That is why in OpenSIPS 2.2 we added a more granular memory support, that allows you to view the memory used by each module (or group of modules).

In order to enable granular memory support, you need to follow these steps:

Checking the statistics during peak time you will get something like this:

As you have noticed throughout this article, dimensioning OpenSIPS for a specific number of clients or provisioning data is not an easy task and requires a deep understanding of both customer traffic patterns and provisioning data, as well as OpenSIPS internals. We hope that using the tips provided in this article will help you have a better understanding of your platform, how memory resources are used by OpenSIPS, and how to dimension your VoIP platform to the desired scale.